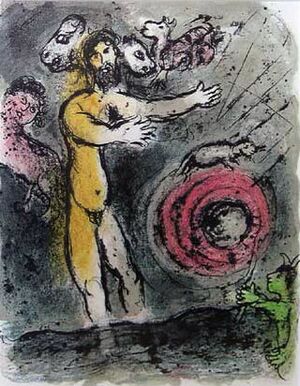 The Odyssey, by Chagall

Homer’s Odyssey is a nostos, or an epic of return, and asks if one can come home again, especially after years of bloody war. In fact, an odyssey is now meant generally as a long journey home, much like Odysseus’ after the fall of Troy. The Odyssey attempts to remake order after the chaos of war. Odysseus, a young man when Agamemnon and Menelaos recruited him for the campaign against Ilium, is now a middle-aged survivor and veteran of that war who must be smarter than the champion Achilles and the leader Agamemnon in order to return home and set his lands in order. War almost seems easy in the light of Odysseus’ journey — at least in war, he knew his enemies. Enemies during peacetime wear many masks; Odyssey must do the same if he is to survive. Odyssey has emenies that can't be be humanly fought; the gods, but Athena helps him to get home safely.

The Odyssey’s action is spread over twenty-four books, set in medias res that generally occur half before Odysseus returns home, and half after. Throughout his journey, Odysseus faces numerous challenges that center around the deceits of the gods, the indulgences of men, and the cross-cultural desire to return home. Short summaries and resources for all of the books of Homer’s epic poem the Odyssey are below. Students new to the Odyssey might want to begin with Skidmore (1997).

The Odyssey in History