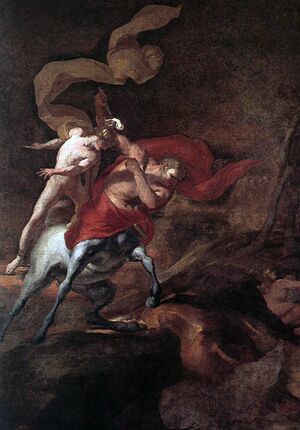 The education of Achilles

Achilles was the son of the sea nymph, Thetis, and Peleus, king of the Myrmidons of Thessaly.

The story of Achilles (The Greek hero) is that his mother dipped him into the River Styx to make him immortal. This made him invulnerable except for the heel by which his mother held him. Achilles was the son of the sea nymph, Thetis, and Peleus, king of the Myrmidons of Thessaly.

When Agamemnon, the king of Mycenean took the maiden Briseis from him whom represented Achilles authority and accomplishments, Achilles withdrew from the battle. The Trojans began winning the war when Achilles and his soldiers, the Myrmidons, refused to fight in battle. Patroclus, Achilles dearest friend and cousin, led the Greeks into battle and was later killed by Hector. Achilles returned to battle to avenge his friend’s death and slew Hector because the armor Hector was wearing was Achilles'. Therefore he knew the weak points in the armor and was able to kill him. Achilles allowed Achaean warriors to stab Hector repeatedly and he then dragged Hector's body through the streets of Troy behind his chariot, despite Hector's plea that requested his body be given back to Troy. In the final battle of the Trojan War Achilles killed the king of the Ethiopians. He then led his troops to Troy where he meets death by an arrow to his heel by Paris.