Section eight begins with the title to a shocking newspaper clipping. It reads, "Trawler marries fourth" (74). The narrator reads this clip while riding the subway home from an unsuccessful job interview with “PM,” a newspaper that is now closed. He immediately assumes that Rusty Trawler has taken Holly to be his fourth wife, but later reads that Rusty has married Mag, not Holly!

When he reaches his apartment building, Madame Spanella is screaming for the police to come, and he hears a lot of noise coming from Holly’s apartment. The narrator goes and bangs on Holly’s door and everything seems to quiet down, but he is not able to go in until Jose Ybarra-Jager, Mag Wildwood's ex-fiancé, arrives with a doctor and opens the door with his key. The apartment is in complete disarray, and Holly is standing rigid on the bed, muttering about someone, whom the narrator later discovers is her brother Fred. The doctor injects her with a sedative while Jose continuously asks if "her sickness is only grief" (78). The doctor kicks both Jose and the narrator out of the room. 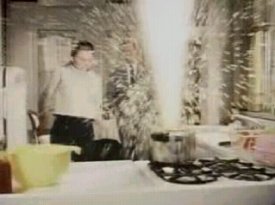 Out of anger, Jose kicks Madame Spanella out of the apartment and invites the narrator to sit with him and have a drink. Jose then shows the narrator the telegram from Doc Golightly that induced Holly’s tantrum. It says that Fred was killed in action. Because of this, Holly stops calling the narrator "Fred."

Jose moves in with Holly, and Holly stops caring so much about her appearance. "Her hair darkened, she put on weight. She became rather careless about her clothes" (80). However, the narrator describes her as seeming "more content, altogether happier than [he'd] ever seen her" (80). She even begins cooking and learning Portuguese. During a conversation, the narrator learns that Holly is six weeks pregnant. She says she wants to have nine children with Jose and ceaselessly talks about how much she looks forward to moving with Jose to Rio, insisting that she is in love with him. The narrator, after hearing so much about Jose begins to dislike him. He even stops saying Jose's name while he is speaking to Holly and simply refers to Jose as "Him."

Capote seems to have known someone in his life that he loved as much as the narrator loves Holly." He describes this woman in such a way that you get the sense he has molded her on someone that intrigued him, that held some allure or had an aura of mysticism that left a deep impression" (Kimbofo). On the other hand, he may have intended to spark a female movement of freedom to do what they want." BaT "inspired women to pack their bags and seek their fortunes in New York and all over the country" (Cash). If this was his goal, then he certainly achieved it! In any case, he portrays very well his anguish upon "learning" that Holly has married Rusty.

These emotions of desire, love, jealousy, and loneliness really seem to resonate throughout this section. The narrator, despite knowing that Holly is not yet married, watches mournfully as Holly is converted into an expecting mother of six weeks by Jose. Holly also mentions Jose in almost every conversation. The once "party girl-about-town and exuberant phony" that he knew becomes a mostly content stay-at-home wife (Prior).

The main turning point, it seems, in Holly's rebellious ways is the death of her brother, Fred. Fred represented her willingness to run up to this point in the novella. His death, like the death of Holly's freedom, is violent and sudden as Jose converts her into a house wife. Furthermore, Holly mourns her brother's death as much as she seems to subconsiously pine for her old ways of travel. In her conversations with the narrator, she seems unresolved with the idea of spending the rest of her life with Jose. Yes, she wishes to spend time with him, but she finds so many faults in him. She even tells the narrator that she would not choose to be with Jose if she had the ability to go back in time. Obviously she is trying to convince herself that she is in love with Jose because now she is pregnant. She continues to repeat over and over again that she loves him. She does admit, though, that Jose is her first "non-rat" lover in her life. This is an easy statement to believe, as most early references to Holly's love life make strong references to prostitution. Taking men to the powder room and coming out with money, for example. She labels all of her past lovers "rats," but she forces herself to see an allure in them. "She feels that she has to if she is going to continue to make a living out of it (prostitution). And not only that, but she hopes to secure her financial future just as easily" (Cash).

This stage of the story is one of the narrator's last chances to tell Holly how he really feels. So why doesn't he? More than likely, he has noticed the pattern that Holly has presented with her other relationships. Every time a man tries to keep her for himself, Holly simply runs away. The narrator, knowing that trying to tie her down will end in failure, assumes that acting indifferent will result in Holly staying as close to him as possible for a longer period of time. 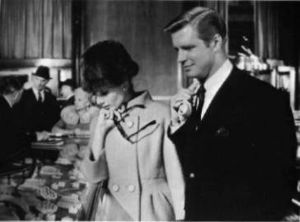 Holly and the Narrator

Though his "plan" seems to work for a time, the narrator could not forsee Holly's drastic change into a housewife resulting from pregnancy. The narrator's reaction to Holly's new condition is easily pitiful. He simply sinks into a pool and drowns in his own self pity. This self pity may even be the result of future events with Holly. After all, he has never tried to sweep Holly off her feet. She may have simply been testing the narrator to see whether or not he really loved her. On the other hand, she may have considered the narrator to be gay. She believed, "If a man doesn't like baseball, then he must like horses, and if he doesn't like either of them, well, I'm in trouble anyway: he don't like girls" (38). Holly found that the narrator did not care for either, so she may have believed that he was gay. If she did, her opinion of his sexuality would have explained her disinterest in him. "Capote describes Holly's two closest friends- the narrator and Joe Bell- as homosexuals, though he does so with such a delicate touch that many critics have failed to recognize these characters as gay" (Pugh). Pugh suggests that Holly's friendship with gay men are one sign of her progressive sexual politics. Holly states, "A person ought to be able to marry men or women or--listen, if you came to me and said you wanted to hitch up with Man o' War, I'd respect your feeling. No, I'm serious. Love should be allowed" (83). Depending on Holly's perspective, her utter lack of feelings for the narrator, despite their intimacy, could have stemmed from a false assumption of his sexuality.

Regardless of her true intentions, this section ends with the narrator giving a wonderful metaphor. "So the days, the last days, blow about in memory, hazy, autumnal, all alike as leaves: until a day unlike any other I've lived" (84-85). The narrator's final days with Holly are described as falling leaves before winter. One has seen leaves before, but they all seem the same. Rarely does any one leaf stand out in memory. One can only remember falling leaves look alike. The narrator feels the same way about his final days with Holly. He can tell little difference between them, and he spends most of the time with her worrying about the time that she would be away from him. Also, like falling leaves, these memories seem to blow away, unable to be caught or held onto as a keepsake.