Holly and the protangist are in Joe Bell's bar drinking martini's and discussing Holly's marriage. Holly never divorced Doc. "Divorce him? Of course I never divorced him. I was only fourteen, for God's sake. It couldn't have been legal" (Capote 72). Holly explains that she has not been to bed, to sleep that is, and for the first time feels the need to justify her actions. "Well, I had to. Doc really loves me, you know. And I love him. He may have looked old and tacky to you. But you don't know the sweetness of him, the confidence he can give to birds and brats and fragile things like that. Anyone who ever gave you confidence, you owe them a lot" (Capote 73). She is telling the protangist and Joe that she feels that Doc's mistake was his "love" for wild things. Holly offers a toast to Doc, believeing that he has made it to the Blue Mountains. 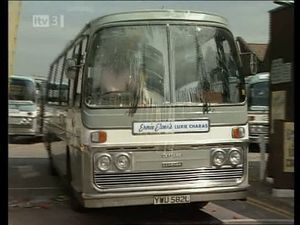 "Capote uses some of his best dramatic irony in the novel with the characterization of Doc Golightly. Up until the last minute when he is ready to board a bus bound for Tulip, he truly believes that he has convinced Lulamae to come home with him. But as the reader and the narrator both know, she can't, it would be a total contradiction to everything she believes in" (Cash 4). It seems Holly has a fear of commitment, or of being tied down that has been implanted in her from her young days. Holly has, "a wild and homeless love of freedom" (Hassan).

When Holly says, "never love a wild thing Mr. Bell", she is breaking it to him as softly as she can that she will not be around for long. She is a wild thing and sees that Joe is in love with her. She wants him to know that it is nothing personal when she leaves, it is only that she is wild and wants to "fly into a tree" and that Mr. Bell will end up "looking at the sky" (Capote 74).

Throughout the entire novella one theme keeps popping up. The theme is love. "Breakfast at Tiffany's is a love story-of a different nature. it is concerned with all forms of love: sexual, homosexual, asexual, perhaps even spirital" (Levine 352). Almost every other page contains an expression of a different type of love or a definition of what love should be. Section seven deals mostly with the pain and regret that love can cause. Doc is a character that can break a reader's heart. Even Holly Golightly felt bad for Doc, "Anyone who ever gave you confidence, you owe them a lot. I've always remembered Doc in my prayers..." (Capote 73). Truman Capote created a masterpiece that everyone can relate to.

The entire scene in section seven takes place in Joe Bell's bar. Holly is drinking a little, and she is giving up some personal information about the previous evening. Why did Holly feel comfortable with Joe Bell and the narrator? What ties them together? Tison Pugh writes, "Critics have long recognized that Holly's friendships with the narrator and Joe Bell are asexual, but it is imperative to note the queer reasons for the platonic nature of these relationships" (2). The reason Holly is comfortable with Joe Bell and the narrator is because they are both gay. Joe Bell's bar is also a gay bar. Readers know this by the descriptions given in the novella. The bar is hidden from view and has mirrored windows (Capote 5). "Gay bars did not advertise themselves...in the 1950's...Mirror windows allow patrons to see outside but do not allow passersby to look in; to this day many gay bars have such mirror windows to protect the privacy of their patrons" (Pugh 2).