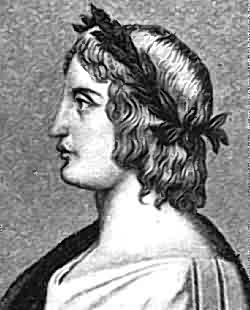 Virgil’s given name was Publius Vergilius Maro (70 - 19 B.C.). He grew up on the farm of his well-to-do-father, near Mantua, Italy. Virgil farmed for the majority of his twenties and continued writing when time allowed. The Eclogues are ten poems, written by Virgil, around 40 B.C. “The First Eclogue reflects Virgil’s gratitude” and deals with rural life in a romantic and idealized way (Everett 389). The theme and mood of this poem brought Virgil success. The people felt they were over urban and longed for country living. The Fourth Eclogue predicted the birth of Christ.

The Georgics was written when Virgil was forty and was essentially a teaching manual on Italian farming. Everett states that “It was above all, consciously, propaganda for the back-to-the-soil, faithful-work-and-simple-living ideal that Virgil, along with the government of his time, believed it mandatory to assert if the Roman hegemony, or any hegemony, were to survive” (390).

The last poem Virgil would ever write was the Aeneid. Augustus tasked Virgil with writing this poem as propaganda to let the world know that Rome’s destiny was to rule the world. Virgil spent his last years making the final revisions on his poem. He and Augustus traveled to Greece to visit some of the scenes of the poem. On their journey back, Virgil became sick and died shortly after landing in Italy. Virgil was very critical of his work, and on his deathbed he ordered the manuscript destroyed, because it was not yet to his very high standards. We are only able to enjoy the Aeneid today because Augustus countermanded the order.