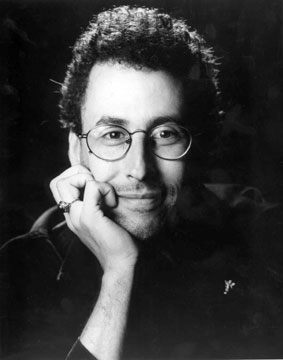 Tony Kushner was born in Manhattan on July 16, 1956, the son of William and Sylvia (Deutscher) Kushner, both classically trained musicians who encouraged his budding interests in the arts and literature. Kushner spent most of his childhood in Lake Charles, Louisiana. His mother, an amateur actress, performed in local plays, and Kushner became entranced by the emotional power of the theater and the arts in general. Kushner moved to New York in 1974 to begin his undergraduate college education at Columbia University, where he completed a B.A. in English literature in 1978. While in college, he also immersed himself in the New York theater scene. Though aware of his sexual preference from an early age, Kushner attempted to overcome his homosexuality through psychotherapy. He eventually came to terms with his sexual orientation and opened his writing to homosexual themes. Following the completion of his degree at Columbia, Kushner worked as a switchboard operator at the United Nations Plaza Hotel from 1979 to 1985, during which time he also enrolled at the Tisch School of the Arts, New York University. Trained as a director under the guidance of Bertolt Brecht specialist Carl Weber, Kushner wrote plays and directed them with his fellow students prior to completing his M.F.A. in directing in 1984. Some of these plays were also staged by the Imaginary Theatre Company at the Repertory Theatre of St. Louis where Kushner worked as an assistant director (Wheatley 1).

Kushner came of age in an era of major changes in the American cultural landscape. Having come to terms in his late teens with his homosexuality, following some abortive efforts to find a "cure" for his sexual orientation, Kushner became inspired,in part, by the writers and artists emerging from the Stonewall generation and after. He was especially drawn to such organizations as ACT UP and Queer Nation, whose chant, "We're here, we're queer, we're fabulous," pervades his two Angels in America plays. As a gay man, Kushner also acknowledges some debt to gay dramatists Larry Kramer and Harvey Fierstein, but more directly significant to his development as a dramatist is his deep admiration for Tennessee Williams, the American dramatist who brought sexuality out of the theatrical closet. It is of central significance that Kushner identifies himself as a gay dramatist (Wheatley 2).

In 2003, Kushner married his boyfriend, Mark Harris and they were the first homosexual couple to be featured in the "Vows" column of the New York Times. Mark Harris is currently the Editor at Large of Entertainment Weekly magazine. Tony Kushner

1979 to 1985: Switchboard operator at the United Nations Plaza Hotel in New York City.

1989: Director of Literary Services for the Theatre Communications Group.

Additional Reading about the Author