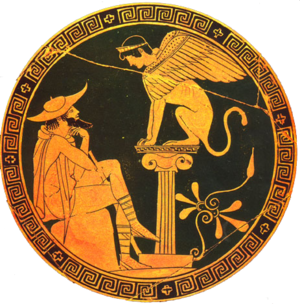 Oedipus and the Sphinx

Oedipus the King, by the tragedian Sophocles, is based on a legend deeply rooted in the cultural identity of Athens. The myth of Oedipus contains a historical and religious authority based on the cultural values of an oral tradition. It concerns the relationship between humans and their gods and, perhaps more importantly, primal hopes and fears that unearth a terror and despair normally buried in human consciousness. Oedipus is a typical Athenian who commits the most egregious of human taboos: incest and patricide. Within the character of Oedipus are both the faults and virtues of the Athenian people. Some critics suggest that Oedipus might be a warning to Athenians that have ushered in a new era of intellectualism.

Oedipus, in Greek mythology, king of Thebes, is the son of Laius and Jocasta, king and queen of Thebes. Laius was warned by an oracle that he would be killed by his own son and that his son would be brother and father to his children. Determined to avert his fate, Laius pierces and binds the feet of his newborn child and leaves him to die on a lonely mountain. The infant is rescued by a shepherd, however, and given to Polybus, king of Corinth, who names the child Oedipus (swollen foot) and raises him as his own son. The boy does not know that he is adopted, and when an oracle proclaims that he would kill his father and marry his mother, he leaves Corinth. In the course of his wanderings he meet and kills Laius, not knowing at the time that Laius is the King of Thebes and his father. In doing so, he unwillingly fulfills the prophecy.

Lonely and homeless, Oedipus arrives at Thebes, which was beset by a dreadful monster called the Sphinx. The frightful creature frequents the roads to the city, killing and devouring all travelers who could not answer the riddle that she puts to them: "What walks on four legs in the morning, on two legs at noon, and on three legs in the evening?" When Oedipus solves her riddle, the Sphinx kills herself. Believing that King Laius has been slain by unknown robbers, and grateful to Oedipus for ridding them of the Sphinx, the Thebans rewarded Oedipus by making him their king and giving him Queen Jocasta as his wife. Together they have four children: Polynices, Eteocles, Ismene, and Antigone, his own offspring and yet his brothers and sisters. For many years the couple live in happiness, not knowing that they are really mother and son.

Then a terrible plague descends on the land, and an oracle proclaims that Laius' murderer must be punished. Oedipus soon discovers that he has unknowingly killed his father. In grief and despair at her incestuous life, Jocasta kills herself and when Oedipus gouges out his eyes and relinquishes the throne. He lives in Thebes for several years, but is finally banished. Accompanied by his daughter Antigone, he wanders for many years. He finally arrivs at Colonus, a shrine near Athens sacred to the powerful goddesses called the Eumenides. Oedipus dies at this shrine, after the god Apollo promises him that the place of his death would remain sacred and would bring great benefit to the city of Athens, which had given shelter to the wanderer.

Free Will versus Fate

“Even if everything is determined, we have no way of knowing what the total pattern is, so we must act on our own best judgment; free will is, therefore, a necessary illusion. Apparently wise men attain some insight into this pattern (or are given it by the gods), but all of us have the freedom to disregard such insight, follow our own desires, and suffer the consequences.” Walter Agard’s The Humanities for Our Time (1949).

The concept of human suffering loses all significance if humans have no free will.

“The central idea of a Sophoclean tragedy is that through suffering a man learns to be modest before the gods.” Bowra

“His Oedipus stands for human suffering, and he neither attempts, like Aeschylus, to justify the evil, nor presumes, like Euripides, to deny its divine origin” J.T. Sheppard

Oedipus’ life could be called a train wreck; that is, two trains were moving head-on toward each other—one oblivous to the truth and one with knowledge of the truth. When these trains met, the wreck took the {emotional and/or physical} lives of everyone close to Oedipus. Although he could physically see, he was blind to who he really was. Oedipus had no idea that his wife was actually his mother, that the people who raised him were not his biological parents, that his daughters were also his half-sisters, and that he had murdered his biological father. First, he brought in the blind prophet, Tiresias, who revealed the future. Second, he blindly denied these revealations. And third, after he could see the revealations were true, Oedipus blinded himself physically.

In the beginning of the play, Oedipus has perfect physical vision. However, he is blind and ignorant to the truth about himself and his past. He desperately wants to know, to see, but he cannot (Hibbison). Ironically, Tiresias, the blind soothsayer, saw the future from the beginning. Neither Oedipus nor his wife, Jocasta, knew how devastating their lives were. When their true history was revealed by Tiresias, they refused to believe him. Tiresias meant two different things when he referred to sight. First, he knew Oedipus was blessed with the gift of perception; he was the only man who could "see" the answer to the Sphinx's riddle (verse 501). Second, he could not see what was right before his eyes. He was blind to the truth he sought (Little).

Oedipus, furious at the suggestion of his guilt, berated the prophet, who retorted by insisting that Oedipus was yet blind to the truth and would soon learn of his guilt (Awerty). In verse 478, Tiresias told Oedipus that “darkness shrouding your eyes that can see the light”. Oedipus angrily dismissed the sightless old man, accused him of conspiring with Jocasta's brother, Creon, to overthrow him (Awerty). Although blind to the truth, as the facts became clear, Oedipus was forced to open his eyes: Oedipus did, in fact, kill his father, Larius, and marry his mother. Oedipus’ slaying of Laius at the crossroads was an intentional act, but also an unconscious one; therefore a “pure” one. Later, when Oedipus blinds himself, the audience is capable of exhibiting the correct emotional response: that of pity and fear. This act, after Oedipus’ recognition of his error, proves that he feels remorse for his actions and shows the audience that he would never have performed them had he known the facts (Lucas). Oedipus was responsible for the bad times in Thebes. The truth was then so obvious to him that he had to confront it.

Oedipus furthered Sophocles’ sight metaphor when he defended his decision to humble himself through blindness: “What good were eyes to me? Nothing I could see could bring me joy” (1473). When Oedipus finally discovered the truth, ironically, he was so distressed that he ran pins into his eyes (verse 1405). Oedipus’ self-inflicted blindness is, in effect, his “purification” of his pathos and makes him a proper recipient for the audience’s pity and fear (Lucas). He had been blinded to the truth too long. Oedipus would forever walk in physical darkness, though the truth was now visible. With nothing to look at, Oedipus was forced to think about his life and what had happened. The darkness and the physical pain he had inflicted on himself was just as agonizing as his blindness to the truth.

Figurative blindness can be harder to deal with then literal blindness. A person who is physically blind knows that it will probably be life-long will learn to accept the blindness. However, if a person is blind to the truth, there is nothing that person can do until they learn and acknowledge the truth. The person may not even know that their situation is wrong. When that person does learn the truth, he tends to feel ignorant. That person wonders if things could have been avoided had the truth only been known sooner. When Oedipus learned the truth, his way of dealing with his figurative blindness was to physically blind himself. In this play, blindness led to the truth, and the truth led to blindness. Oedipus and Jocasta were blinded, yet found the truth.

A free spirit of inquiry

Knowledge comes only through suffering

The responsibility of humans for their own acts

The error of setting human reason above obedience to the gods

Archetype of drama? Hero’s quest for himself.