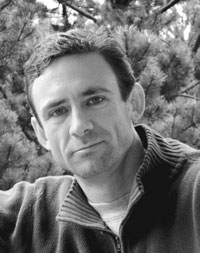 The American novelist of Fight Club.

Charles Michael “Chuck” Palahniuk (pronounced "Paula-nick) was born on February 21, 1962 in Pasco Washington. He is one of four children born to Fred and Carol Palahniuk. He lived in Burbank, Washington until his parents divorced, sending Chuck and his siblings to live with their grandparents. Palahniuk graduated from Columbia High School in 1980. In 1986 he graduated from the University of Oregon with a degree in Journalism. He now resides in Portland, Oregon.

Palahniuk did volunteer work for a homeless shelter. Later, he also volunteered at a hospice as an escort. As an escort, he provided transportation for terminally ill people and brought them to support group meetings. Palahniuk ceased volunteering upon the death of a patient to whom he had grown attached. When his first novel, Invisible Monsters was rejected for being too disturbing, he began to write Fight Club. He wrote this as an attempt to disturb the publisher even more.