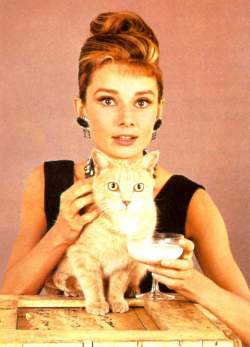 Holly and the cat

The narrator notices the decreasing mention of Holly in the news and finds himself longing to be with her once again. He reads in the headlines of a newspaper about Sally Tomato's death and how Holly is believed to be in Rio. Holly's "abandoned possessions" are sold, and a man name Quaintance Smith moves into her old apartment. Little is heard of from Holly, until the narrator receives a postcard in the spring. It appears she has met someone new and is looking for somewhere to live. He wishes he had an address in which to write Holly to tell her that he found her cat.

The last section of the novella focuses on the narrator's last regrets concerning Holly. The gossip in the paper dies down and he goes through the months of winter hoping to hear from her. In the time that has passed since she left, a man named Quaintance Smith has moved into her old apartment. He receives far better treatment from Madame Spanella that Holly did. He hosts parties and has the occasional black eye, for which Spanella aids him with "filet mignon" (110).

The headlines in the paper tell of Sally Tomato's death and the disappearance of Holly (109). This sums up the story by having Holly return to her carefree ways by running away again. The narrator seems more worried about where she is than her running away from the law and Sally Tomato's crooked business. Paul Levine writes," there is more than a hint that they form a part of a solid literary phalanx of spiritual non-conformists, of yea-saying rebels whose off-center vision, whose unflagging but unorthodox sense of rightness alienates them from society" (352). Holly Golightly was right in her own way; unfortunately, her sense of rightness didn't hold up in society. It's no wonder that she ran away.

The mention of the Trawlers countersuing for divorce seems to add a humorous turn on the whole affair between Holly, Rusty, and Mag (110). It seems that Mag was only out for money and/or jealousy from the beginning of her affair with Rusty. Holly was not at all affected by their marriage, and proved it by leaving for Rio in search of another life.

After Holly is gone all of her possessions were sold by the owner of the Brownstone. A man named Quantance Smith moves in. Quaintance Smith is considered to be gay. Capote gives his readers a hint when he writes,"...and he(Quaintance Smith) entertained as many gentlemen callers of a noisy nature as Holly ever had..." (Capote 110). Holly was straight and threw parties for male dates. Why was Quaintance Smith throwing parties for men only if he wasn't dating one of them? Pugh Tison writes,"The name "Quaintance" is an allusion to George Quaintance, a painter of the 1940's and 1950's, whose art bordered on soft-core gay pornography" (Tison).

The novella ends with the narrator's hope that Holly has finally found a home, a venture in which her cat has been successful. He regrets most that he cannot reach Holly to tell her about the cat. He expresses that whether it be an "African hut or whatever," he hopes Holly "arrived somewhere [she] belonged" (111).

"The dichotomy of good and evil exists in each Capote character just as the dichotomy of daylight and nighttime exists in the aggregate of his stories" (Hassan). Everyone of Capote's characters either represents a good presence or a bad presence. Toward the end of the novella, the narrator's love for Holly shows when he spends weeks trying to find her cat. Not too many people would do something for someone else that required so much time and effort.

Even though the narrator has all these regrets, he never expresses any remorse about never telling Holly how he really feels about her. He is so excited to hear from her, and has all these things he wants to tell her. So the narrator is still thinking about her and still in love with her, but he has no desire to know what would have happened if he would have told her how he feels.