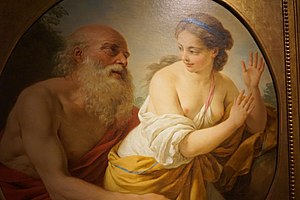 Allegory of Youth and Age

The presentation of an abstract idea through more concrete means.[1] Traditional allegory is a narrative with at least two levels of meaning; the first is a surface story line, a complete, coherent, but basic plot. Underlying this plot is a second, deeper level of meaning, which may be religious, moral, political, personal, or satiric,[2] Allegory attempts to create interest both in the primary story with its characters, events, and setting, and in the ideas and significance the story conveys. To this end, personification is a common device in allegory; characters and places are often named after qualities or ideas the author wishes to represent.[3] The characters, settings, and events can be fictitious or historical, but they are used to represent meanings independent of the action in the primary or “surface” story. Allegories do not need to be entire narratives, and non-allegorical narratives can contain allegorical characters or elements. Some critics consider allegory to be extended metaphor, which says one thing but means another.[4]

It is important to note the difference between allegory and symbolism. Both attempt to suggest other levels of meaning by presenting abstract ideas through concrete images, but allegory makes a structure of ideas the controlling influence in the work. A symbol carries a natural relationship to the events of the story; in allegory, the surface story is often a thinly disguised courier for the secondary meaning.[2][1]

Allegory is still used as a narrative device in literature today, in drama, poetry, prose, and even comics (Gary Trudeau’s Doonesbury, for example). Allegory was most prominent in the Middle Ages, with dream vision and the morality play; other types of allegory common in history are the fable, the parable, and the exemplum.