A movement in literature and visual art that started in France in the second decade of the twentieth century and thrived in the inter-war period. It originated from Dadaism, a movement created during the First World War that created anti-art and negated reasoning, but took a different path from its precursor because surrealism used the new "'positive' ideas which were to implement the purely negative and destructive outlook of Dadaism" (Samuel 537). 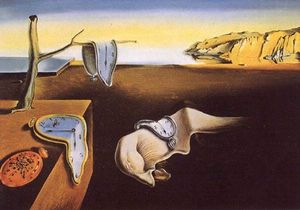 "Persistence of Memory" by Salvador Dali (1931)

The term ‘super-realism’ was first used by Guillaume Apollinaire in 1918, but ‘surrealism’ has been introduced by André Breton, a former Dadaist, in his Manifesto of Surrealism in 1924. He defined this new movement as: “Psychic automatism in its pure state, by which one proposes to express -- verbally, by means of the written word, or in any other manner -- the actual functioning of thought. Dictated by the thought, in the absence of any control exercised by reason, exempt from any aesthetic or moral concern” (Breton).

In literature, the leading character was André Breton, who defined surrealism not as a "poetic form," but a "machine" that recorded thoughts (Samuel). There were no aesthetic or moral boundaries that limited writers because it was spontaneity that was important. Therefore in pursue of that, many writers often applied the theories of Sigmund Freud and wrote in hypnoses. Other writers representing surrealism were Paul Éluard, Jean Cocteau, Guillaume Apollinaire and Louis Aragon.

In paintings, surrealists tried to capture the dreams and fantasies and then reproduce them in forms available to the conscious mind (Cuddon 936). Thus in paintings strange objects with abnormal shapes, colors, and proportions were very common. By that they combined two realities together and made a ‘super-reality’ or surrealism. Among painters of surrealism there were Joan Miró, Max Ernst and famous Pablo Picasso, and Salvador Dali.